*See if you know the answer to the quiz question and post your response. I will post the answer in a few days...


This scooter was introduced in 1961 and tried to hog the scooter scene by riding through the Mojave desert: 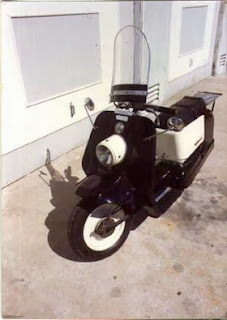 Can you identify this scooter?

The Topper was the only scooter that the Harley-Davidson company ever produced. It was introduced in 1961 and sold through 1965. It was a 165cc 2 stroke engine and required the rider to start it much like a lawn mower with a rope-recoil device. The engine was air cooled, but possessed no fan. Cooling was accomplished by the forward movement of the scooter into the air.

"In 1959, a Topper was ridden from Bakersfield, California to Death Valley and back without repair or adjustments requiring tools. The route went through Trona, through the Mojave Desert to Stovepipe Wells, on to Badwater Basin, the lowest point in North America at 282 ft (86 m) below sea level, then to Whitney Portal, 7,851 feet (2,393 m) above sea level on the side of Mount Whitney, after which it returned to Bakersfield.[11]" (from Wikepedia)
Posted by Deb at 12:08 PM