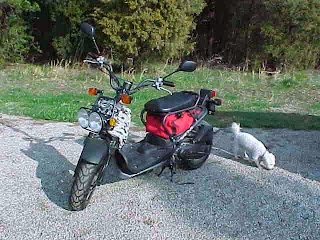 I've been spending my days riding around in my Honda CRV delivering flowers, plants, and dog food amid blizzards and floods for the past month. Thank the Snow Gods that the worst of winter is over!

When you're out on the road like this you spend a lot of time reflecting on this and that. A lot of the time is spent fantasizing about riding again in spring and seeing new routes and making a note of them amid the flurry of traveling to and fro.

But it happened and now it is slowing down a bit because I am now no longer doing a courier route in addition to my flower "giggin'". So I have my mornings back to relax and blog a bit.

More and more my thoughts are on getting out on the scooter and bikes or just hiking the park trails with my dogs. I've been thinking about how I got into riding a scooter in the first place.

This was in 2007 and we had been out "on the farm" for about a year. My 78 year old neighbor lady was riding up to our door on her Chinese ATV and sitting and talking with me out on the porch, most every evening in the spring.

I envied her mobility and her chanting, "Well, I'm off to enjoy my evening out on the road for a bit before I head home for my 7:30 cup of coffee and "Jeopardy"!

She went on to tell me how she loves to ride on her ATV around the rural roads up on our ridge. Just time to get out in nature and enjoy the sights and smells and totally unwind.

Wow! I wanted THAT too!

At that time I was driving to a job that carried me through a little tiny village in a valley. I mean "tiny". No stop lights and you were through it in the blink of an eye.

Right there in the heart of the village sat a Honda Power sports dealership! It was small too and family-owned. Just a building, a barn, and a gravel parking lot. I decided that I was going to stop in and look at an ATV for myself. Maybe even test ride one.

So one day I did and discovered scooters! I had no clue about this world of scooters beforehand. I had ridden a Honda motorcycle in the 1980s, but scooters? No idea.

There sat this little gunmetal gray one with a camo casing and big fat tires. I thought it was pretty cute and cool and the "100 mpg" sticker blew my mind as well.

Within a week the notion of an ATV was out of my head and I was taking delivery of my 2006 Honda Ruckus 49cc, water-cooled, 4 stroke scooter! 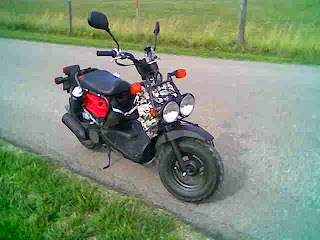 No scooter was ever loved more than that scooter! I called it "Scootie" and rode it everywhere. Pretty soon my neighbor and I were traveling the ridge on summer evenings and chatting up the Amish neighbors and drinking coffee under the moonlight of the gazebo in her front yard. 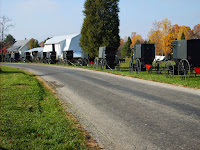 I rode my scooter in the woods on trails, across the fields to vegetable gardens to collect tomatoes, herding Holstein cattle up the road, to the flea markets, and to the library and grocery store.


I loved it so much that I just got a thrill of joy gazing at it under its blanket out in the garage in the dead of winter when riding was out of the question.


Life was sweet. Everyone now seemed to be interested in scooters as the gas prices soared from 2007-2008. When the BIG recession hit in late 2008 I began to fear the loss of my job and we began to worry about making financial ends meet out on the farm.


In February 2009 I lost my job and panic set in about paying the bills. In heart wrenching desperation I put Scootie up for sale on Craigslist. Not long after that I got a response and two students from Akron came in a pick-up truck and hauled Scootie away. I cried as the truck drove off the property and almost chased it down.


It is one of the biggest scooter-related regrets I ever experienced, losing my first scooter love. If there was a way to track it down I would. I watched the Akron Craigslist for a while, hoping to see her for sale, but finally accepted that she was gone forever.


I went without a job for 3 years and without a scooter for 1.5 years and swore that no matter how bad times got I would never be scooter-less again if I became unemployed again. Scooting gives me so much joy, so much freedom, and so much happiness.


Fast forward to the topic at hand which is "spectrum of riders". What I've come to realize is that there is a "spectrum" of 2-wheeled riders. The spectrum runs from bicycle to scooter to motorcycle, the way I see it.


Many scooterists started out as bicycle riders. Many motorcyclists started out as scooter riders. These would be the major patterns. Some continue to ride 2 or 3 or just one exclusively. Then some people go back and forth. Or just go back.


I always rode bicycles, from age 4 onward. That became my main focus through the past 10 years of my life here in SW Ohio. We have an extensive network of rail trails and some awesome places to ride. Places far out into nature and woodlands, free from cars and noise and crowds. Those are the places I gravitated to on my road bike, mountain bike, and even a few recumbent bikes and trikes.


I rode to get away from cars and people and to get lost out on the trail along the river where the only "din" was the sounds of birds and the chatter of squirrels.


And so my scooter riding started out with the same goals in mind way out there in the country up on that ridge. As time went on I "thought" that I "should" want more power on a scooter and tried to move up out of the 49cc models. That didn't work out there because the 49cc models were so much fun to ride and I "rode it like a bicycle" and went anywhere I damn well pleased on the Ruckus and the Met anyway!


I moved to the burbs out of "financial necessity" aka "need a job" in the fall of 2012 and found myself now dealing with traffic all along my rides, all the time. I hated it, but tried to adapt, and eventually found some tolerable back roads that led me out into the countryside for my scooter adventures. 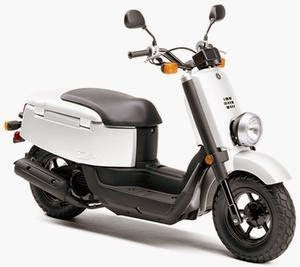 Bottom line is that I was a hard head all along, did a lot of "shoulds and oughts" and did stupid trading, buying, and selling and I am still a scooter rider who likes to "ride it like a bicycle" and that is where I fall on the spectrum.


I am never going to go "up" to the level of motorcycle riding because I hate riding in traffic. I hate the anxiety and exhaustion that it brings and besides, I drive all day as it is IN TRAFFIC delivering flowers. Why would I want to "play" in traffic on a motorcycle and/or larger scooter? I wouldn't.


Last year I bought 2 new bicycles, end of season, and plan to get back into riding on our wonderful, quiet, car-free rail trails and parks around here. A Fuji flat bar road bike and an Electra Townie 21D (Thank you for the inspiration, Sonya!).


I have not taken either one out yet, but am eagerly looking forward to doing so. 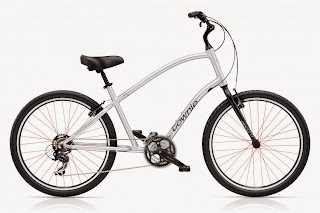 In thinking through this "spectrum" concept I have freed myself from the pressure or expectation or whatever one calls it of riding among cars on a fast moving scooter or motorcycle as a form of entertainment. For me it is not, and I am done experimenting with the idea.


Yep, "riding it like a bike" on the back roads and quiet streets, among as few cars as possible. 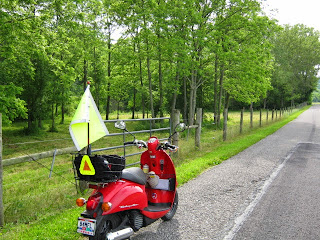