Like Peach in "Finding Nemo", I try to focus on finding a "happy place" in my daily life.

Usually it is a matter of attitude, and easily attained.

Sometimes though it is a matter of needing to make drastic change after agonizing, drawn out misery and painful decisions.

My situation was the latter. After sixteen months of the most incredible work stress I have ever experienced, I resigned and walked out to freedom yesterday.

Right out the door, never to return.

My spirit, mind, and body just could not take it anymore and I had done all I could do to fight the situation as an employee. It had to be over and so it was.

Now I will deliver flowers for the next two weeks and see what is next for me.

I am sad, but elated. Exhausted, but energized. Scared, but optimistic.

Today I woke up to a new world, full of possibility.

It was a strange, sweet feeling.

I am celebrating and looking forward to the best Christmas ever. A rebirth of how I spend my time bringing in kibble money and caring for those I hold most dear.

Oh how a celebratory scooter ride would be awesome today! It's cold (30s), damp, cloudy, and kind of all gray looking out there. We'll see.

Maybe tomorrow the sun will burst forth and the birds will sing!

In the meantime, I have found a Happy Place after a long time of unhappy.

And I am so HAPPY! 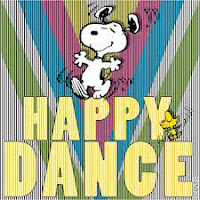 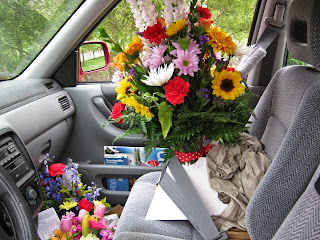 The Holiday Flower Run has begun and I am entering into my third season of participation.

Since 2012 I have been a seasonal contract delivery driver for Thanksgiving, Christmas, Valentine's Day, and Mother's Day deliveries of cut flower arrangements, fruit baskets, funeral arrangements, wedding bouquets, and the like.

I got into this role on a fluke. I was unemployed in October of 2012 and skimming the Craigslist ads for some seasonal work. I had driven routes for years as a home health medical professional and I knew the surrounding counties like the back of my hand. I had also delivered things before, like oxygen tanks, walkers and wheelchairs, medical supplies, and pharmaceuticals. I loved the work.

It was clean, pure labor where I made a stop, dropped the item, maybe enjoyed a friendly exchange with the recipient, and was on my way. In the interim I was in my truck, enjoying the quiet or listening to talk radio or singing along out loud.

The pay wasn't great, but the pay off was delightful: peace, quiet, independence, freedom. Sweet time alone on the road.

So I applied and was hired to become part of this floral delivery pool.

I first began delivering flowers during Christmas of 2012 and I have been doing it ever since. I've posted a few pics here about my episodic seasonal outings and I plan to post some more from this Christmas run which starts on December 16th and runs right through Christmas Eve midnight.

Why do I do it? My answer is simple, yet complex. I do it because it is fun, it is fulfilling, and I feel part of something larger than just my mundane world of self. Plus I make a little money which can't hurt either.

It is fun to be out and about and to see all the Christmas lights in places where I would not otherwise travel. I have learned so much about my local world and the people in it. Sort of like how scooting opened up my world to other levels of life around me.

I listen to the Christmas songs and sing along and just enjoy my thoughts and memories of many Christmases gone by. Occasionally the radio offers a local Christmas history broadcast from the 1940s-1960s or a call-in show comes on and people share memories and traditions. My rides force me to slow down and enjoy the season rather than rush it.

I get caught up in the Christmas spirit which is underlined by the smiles at the door when I drop off an unexpected splash of color wrapped up in good holiday floral smells.

It is nice to bring a smile like that, to be sort of like a Santa Claus myself.

I've met interesting customers, petted many dogs, listened to lonely shut-ins, carried items in and placed them on kitchen counters or tables for older people too frail to lift them.

In all of the hundreds of deliveries so far I've only gotten two tips: one from a very poor lady who gave me $2 and a hug and the other from a physician who knew me from my health care years in home care ($20). That one bought Chinese food for our house that night!

The people in the warehouse are awesome as is the business owner. Everyone is friendly and supportive of each other. I like feeling part of that team. They are mostly older, retired men and a few middle-aged full-time workers who have been loyal to the owner for many years. I'd like to be among that latter group and have offered if a slot opens up.

These wonderful people were there for me in 2013 when my car was stolen and my dog abducted while delivering flowers. I never experienced a more compassionate group of co-workers. When I finally tried to return to work that week they had taken up a collection of cash equivalent to my week's lost wages!

They themselves struggling to put gas in their own trucks, did this for me. I will never forget that deed of kindness. It touched me deeply and helped me realize that there are still good people out there.

Business has seemingly been picking up in the floral world around here so we expect a huge amount of orders. As I go along I will post some photos of my experience and maybe tell a few stories of some of my most memorable deliveries. Yes, some are doozies.

So far the topper was at Thanksgiving this year. I was leaving a fruit basket at a house as the door bell had brought no one to the door. As I turned to walk off the patio the door opened and an elderly lady appeared at the door.

She called out to me and asked me if I could hand her the fruit basket through the door as she "had no pants on"!

I tried not to look, but how can you not?

It was true: she had no pants on, just an LL Bean fleece pullover and bedroom slippers!

More photos and some stories to come...