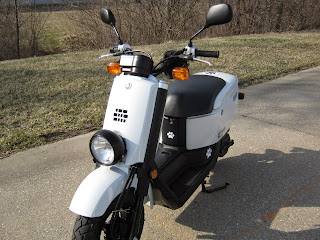 In every area of life there are hidden gems of experience, known only to the lucky few who stumble upon them.

Such it is with the humble little Yamaha C3 scooter.

Only sold in the United States from 2006 to 2011, it still paints the scooter scene in Europe as the "Giggle" and in Japan as the "Voxx".

It takes it's looks from scoots like the venerable Cushmans and the Harley Davidson Topper. It is a unique look and it is not for everyone. Some even call it "homely" and compare it to a Coleman cooler on wheels.

Like an old flop-eared mutt that nobody selects at the dog pound, it often goes unloved and unnoticed. Evidently enough so that it did not continue to sell well here in the good old USA and Yamaha pulled it from the line-up for 2012.

I feel compelled to do a little ride report of my time on the C3. I have owned and ridden two other 49cc scooters, the Honda Ruckus and the Honda Metropolitan. The C3 outshines them in some ways and is only mildly deficient in others.

Things that I liked about the C3 were plentiful. I liked it's quirky "look" which got it the nickname "Boxy" due to its huge under seat storage. I could go to the grocery on it and pretty much stuff that compartment with most of my grocery items. Even a box of pizza and a 12 pack of pop fit under that lid! 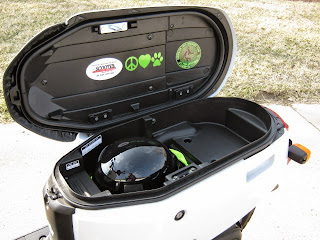 Not only that, but the seat itself was pretty darn comfortable. Much more so than the Ruckus, which was like a buckboard wagon. Not as much as the Metropolitan, which feels like an English riding saddle, contoured to the keester. But pretty comfortable and you could slide back and stretch out your legs pretty easily. I liked that.

I liked it's big, fat tires and longer-than-a-Ruckus-and-Met wheelbase. This made for a stable ride as it cruised up to it's maximum speed of 43 mph. It never felt "squirrely" going down the road and it ran quietly too.

I like a quiet ride in the country, which was the main reason I got rid of the Genuine Buddy and got the Honda Elite 110. 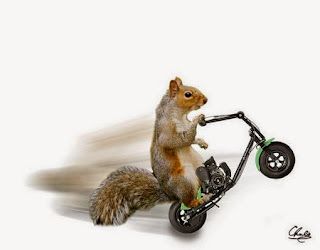 It had "motorcycle like" handlebars and it's controls were neat, compact, and easy to read. It also had "push to cancel" turn indicators. I liked those especially. 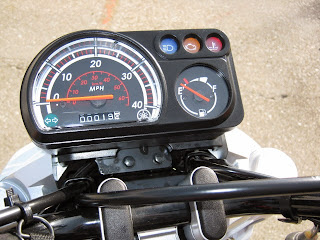 The C3 was a bigger scooter with a higher profile in traffic than the Met or the Ruckus. Perhaps minor to some, but it's worth mentioning. Even though it was a bit bigger, it was still easy to push around the garage and heft off and on the center stand.

A few things I did not like next. The OEM rear rack was a joke. It called for drilling holes in the top lid and I was never going to do that or let anyone else do it either.

And in photos that I saw it really was quite ugly. So I never elected to install one and I really missed that ability to put on a basket or a top case (I am a basket person) to haul cargo.

Specs said "two inches of travel", but I think that was a real stretch of the truth. It "bottomed out" just going down the road.

Wrapping up with all the good features, the electronic fuel injection was wonderfully sweet! It started right up and Yamaha had the good sense to even put a kick starter on the scoot, though it probably would never need to be used. (Hey, Honda, why not on the Elite 110?)

Gas mileage was a bit more than the Ruckus and Met, falling around 115 mpg in a 1.3 gallon tank. Pretty awesome.

With the EFI and 3 valves, the scooter could out-accelerate the Ruckus and the Met, but struggled to climb to and pin around 43 mph tops on the meter.

Still, you didn't care because it was so much fun getting there and the little scoot handled like a mini-motorcycle. 43 mph felt like 83 mph! Wheeeee!

On a whim and in need of some financial padding, I listed Hoot for sale and a fellow from North Carolina called and wanted to come and pick her up within 24 hours of my listing. He had been looking high and low for a 2011 and missed the one he sold, so was willing and ready to make the nine hour drive.

With a heavy heart, but glad she was going to someone who would love and appreciate her, I let her go. I have to say I have been sad since, but you do what you have to do.

I know that I have a thing for little 49cc scooters and I also know that one day I will have another Met, or Ruckus, or maybe even another little Yammie C3.

For some she is the "ugly duckling" of the scooter world.

For me, she was my little scooter that truly was a "hoot" to ride! 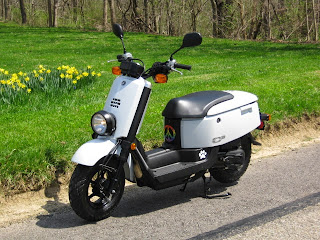 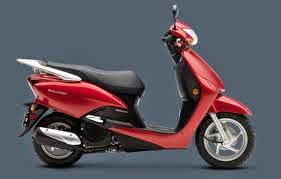 And I LOVE it!

Merge the Buddy's fit and fun with the smooth fuel-injected quietness of the little C3 and you get the Honda Elite 110!

It has turned out to be my "perfect scooter"!

Anyway, thanks to the wonderful folks at Honda of Florence Kentucky I was able to get the scooter home to Ohio. Not only did they transport it, but they gave it a thorough check over once I rode it to the shop from the seller's house. They even put a "pigtail" on it for me to use on the battery tender.

This is one awesome dealership and I am now a loyal customer!

Anyway, once I got it home I went over it and wound up adding some fresh oil, fresh coolant, and adding Seafoam (ta da!) to a fresh tank of premium gasoline.

Then I rode it and encountered bunches of people who stopped me and wanted to know all about the scooter! This has never happened to me before.

I got many compliments and one older gentleman is now going to try to find one for himself because he says he'd like to "ride it to coffee" at the local McDonald's in the morning!

I rode it to the Autozone to get some oil and coolant and the guy came out and admired it and asked a bazillion questions and then went inside with me and spent about 20 minutes helping me pick out "just the right oil and coolant" according to Honda's standards. It was amazing!

I even had a guy on a motorcycle trail me and stopped me and wanted to know what kind of scooter it was and said it was a beautiful bike!

I'm not kidding, guys! It was fun but actually kind of weird, ya know?

After I came home for supper I took it out for a little late night spin around 11pm. Just wanted to ride it again so desperately.

I haven't felt this way about a scooter since I got my very first Ruckus in 2006!

It is THAT exciting to me!

Sunday update: took it on a 30 mile ride on some local back roads, ending in it's first trip to the grocery store... 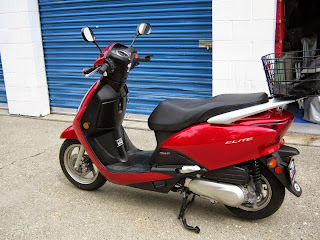 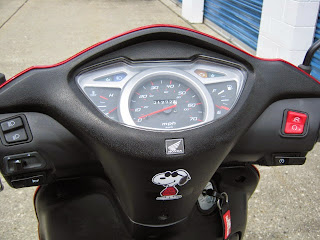 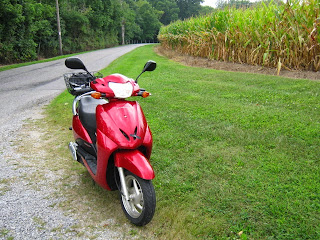 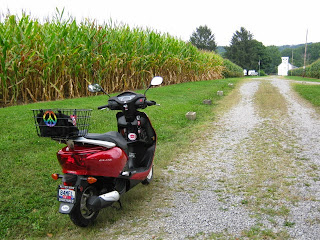 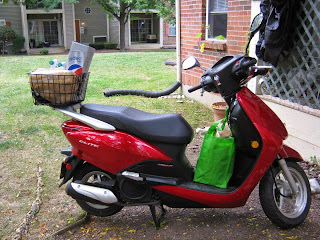 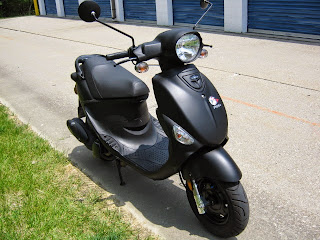 The Psycho has gone to live in Texas!

How fitting for a lean, mean scooting machine to roam the back roads of the wild, wild west!

The buyer actually drove to Ohio to pick her up last Friday. She was piloting a big, lean, mean, BLACK pick-up truck and the Psycho seemed right at home perched up in the back.

Everybody was smiling, including me, because now I had my money to go and get my new BIGGER scooter...TOMORROW!

Little "Hoot" is getting a new stable mate! And she is fuel-injected too!

And she's a HONDA!