Once upon a time there was this crazy woman who cleaned out her apartment of 10 years and packed up her partner and two dogs and moved to the country. Why? She wanted a house with a yard for her two dogs and she had always wanted to live on a farm.

Basically that was it.

So in May of 2006 we started to move our little canine family into this little white house WAY out in the country. We rented this house from a woman whose father had built it for his ailing wife (her mother) when he was 75 years old. He built it by hand with only a little help from Amish workers and his son.

The foundation was laid in 1997 and it took him years to finish it out.

It was built with love and care, taking into consideration her limited endurance and physical abilities. It was a little 2 bedroom, two bath, ranch house out in the middle of a field which was surrounded by cedars, oaks, elms, dogwoods, and miles and miles of cow pastures and open meadows.

Everything was special for her: electrical outlets at shoulder height, a window which faced the original old (50 plus years) farmhouse, a front and back porch which offered surround vistas, a huge kitchen with a big farm table and a washer and dryer right there in the kitchen, and Amish hand-crafted cabinetry and furnishings.

It had central air and heat, a wood burner furnace, a huge 2.5 car garage, storm doors and windows, and huge cabinet space in the huge, wonderful kitchen.

Wall to wall berber carpeting ran throughout and hardwood floors were laid in part of the kitchen and the front foyer.

All this, smack in the middle of southern Ohio Amish country, and out in the middle of NOWHERE. Well, relatively speaking. The view out any window of the house was woods. No cars, no people. At first this is fascinating and delightful. Notice I said "at first".

There were 5 villages in the county. The newspaper came out once a week and was the only way to keep up besides the little radio station which played only country music and offered a morning swap line for your shopping delight. They read the news from the paper which came out every Wednesday.

It was 2006. Both of us had been laid off of our long-term jobs the fall before and were on Ohio's unemployment and our savings. We never in a million years had ever struggled to find jobs in our lives. We wanted to move, we got a job. We wanted to switch jobs, we got a job. No problem, no worry.

So we spent 2005-2006 skating along and focusing on caring for her mom who was terminally ill in northern Ohio. Jobs and a new place to live were not in the forefront of our minds until the spring of 2006 when we started thinking of moving to a house.

I met another social worker (I used to do that) at a job interview and we became friends and eventually I learned she had her parents' house sitting empty out in this county which was 3 counties away from the city. That's how I came to learn about this house that I am going to tell you about. Notice I did not belabor the details. Be glad. They are too cumbersome.

So we moved to this house in the country built by the hands of a man who loved his wife more than anything. The fact that she died before he finished it was tragic.

Then the fact that no one had ever lived in that house until we moved in it in May of 2006 was a further irony. He died in the fall of 2004 of cancer. She died suddenly of a heart attack. The house had sat empty and unused for almost two years.

Any so here we were, moving in by shuttling our stuff down the "Appalachian Highway" in two SUVs, into this little white house in the middle of nowhere.

Had we been able to predict the future, we would have stayed put in our second story apartment of 10 years. But life does not work that way and we had "dreams" of country living in a house with a yard for our dogs. Here we had one, "dirt cheap", nice, clean, brand new, and owned by a friend of mine. It all seemed perfect.

The economy had not "tanked" in Ohio yet. Anything was possible in our sluggish minds as we escaped burb living and took up country living, eyes wide open and brains turned in the "off" position.

Looking back I wonder just what we were thinking. I've come to conclude that the answer is "not much". We were acting on impulse fueled by our grief over job losses, but mostly over grief regarding the loss of my partner's mom.

I think we had just a quiet desperation to find something different from what we'd lived for the past 10 years, which was a garden apartment.

In May of 2006 it was looking like we just might be slicing off a piece of that good old fashioned "Mayberry" pie.

Coming From, Going To 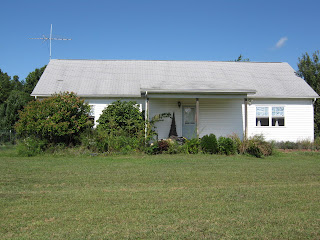 Well, I've not been blogging much mostly because I can barely find the time to breathe, much less blog. My 40 hour a week, 9 to 5 job has encapsulated my life by necessity aka the need for economic survival and I sometimes feel like a "work bot".

Plus, I am on a computer all day on my new job and the last thing I feel like doing is going on the computer when I get home.

But I am going to get back on here and start writing again this week!

I thought I'd start a "mini-series" of sorts in the coming days wherein I reflect on the many levels of change I've gone through since moving from my 7 year residence in a very rural area of the Appalachian foothills into my suburbanite cottage-by-the- mall.

There will be good and bad presented. There will be celebrations and bereavements. There will be history and lots of humor and craziness. And wonderful friends and experiences that I will cherish forever and so I need to share all that.

Several people have said to me, "You need to write a book". Well, on another blog I AM writing a book, but I've been wanting to write about what it was like living out in the Appalachian foothills these past 7 years. So now I'm going to do that too!

And I need to get writing again on this blog anyway, so this will be the direction I take now.

It was during this time that I discovered scooter riding and fell into "Ruckus Love", so it is fitting that I write about it all on this blog for that reason too.

So this is what I am going to be writing about for awhile. My journey to the country, our life out there, and the transition back here to the suburbs.

I'm not sure how long I'll write about this. I've got lots to say, lots of stories, lots of thoughts and observations.

So as the spring snow blows outside my window, I retire to sweet dreams of what has been and what is and what might be... 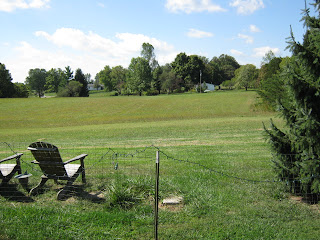