These dudes are NOT motorcycle snobs. They are the epitomy of "Cool"!: 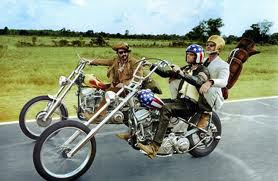 IF YOU ARE EASILY OFFENDED, DON'T READ THIS BLOG POST! This is meant to be a "tongue-in-cheek" poke at scooter and motorcycle riders, of which I am one myself.

Now that we got that part over with...

I have been riding a scooter since 2007 and before that I rode a motorcycle in my youth. I don't know if any of this makes me a "veteran", but it does make me an experienced rider of a 2 wheeled machine. In my case, scooter, though it could be a motorcycle because the same observations apply.

Tired of seeing them, tired of their ilk, tired of their strutting around in parking lots, tired of reading about them on websites where they act so passionate about riding but really, they'd give it up for the latest smart phone or Caribbean cruise.

I don't know if "scooter snobs" are exactly the same as "motorcycle snobs". I suspect a few subtle differences. The commonality is that they think they are superior or somehow better than those who don't ride a two wheeled machine and they want you to know it!

You know them when you see them out and don't lie, you think the same things I am thinking: these people are snobs!

They wouldn't speak or wave to you while you are out riding on your machine if their lives depended on it. Mostly because they don't have enough road experience to actually lift that left hand off the handlebar and wave, but more than that they just see themselves as superior to you as they glide by on their $10,000+ motorcycles or buzz by on their little color-coordinated scooters.

The motorcycle variety is usually found parked alongside the road in some winery out in the boonies or some motorcycle shop's "open house". You know their bikes-they are the ones decked out in ALL the highest priced gear, sporting the most expensive and gaudy saddlebags, and possessing the cleanest tires.

Cleanest tires? That's right, because they only ride on weekends in fair weather. Yes, of course they bought that expensive rain suit but heaven forbid they should have to pull it out and use it because it might detract from their $400 dollar jacket and their $700 dollar helmet.

Plus they have no clue how to ride in the rain and they are scared to death of a rain drop falling on the pavement ahead of them as it might mess up those clean tires!

You also see this variety sashaying out of the dairy bar, dressed in black logo leather jackets, wife beater tees, skull adorned bandanas, and sporting removable tats up and down their arms.

They have cleaned out the shelves at the local motorcycle boutique of all the logo wear and so they now strut about in the grocery store or ride to the hardware store decked out in $500s worth of tee shirts, vests, ball caps, bracelet, and earrings, looking like a walking billboard for every charity ride in the city or state or every motorcycle company on God's earth.

Their "chicks", aka usually suburban trophy wives, wear their own embroidered, leather-vested regalia while desperately clinging to their partner's backs as they ride with the corporate moto pack from rest stop to rest stop and usually on Sundays.

Everybody thinks they are "lookin' good" while looking at their watches to hurry up and get this parade over with because the sun is too hot or it's clouding up or they are just ready for the hot tub and the crafted beer.


This guy is NOT a scooter snob...he is an artistic legend! 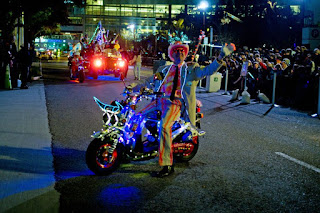 Scooter snobs? Well, it's hard to describe them because they are rarely seen riding their scooters. Certainly not out in the countryside and rarely on weekends unless they need to run up to the latte shop and it's not raining and they are in the mood.

This variety starts out thinking they will commute to work in the burbs or city and once they start up they realize that they might get wet, could get cold, and will definitely mess up their hair if they wear a helmet and so after a few tries the scooter begins to sit in the two car garage while they drive the SUV to work.

Gas prices are down, so why not? Many of them started out on a scooter because of high gas prices and if that is a primary motivation to ride a scooter to work then they were sadly misinformed as to what is involved in riding a scooter safely, much less in riding one to work in rush hour traffic in the burbs or in town.

But they don't consider any of that before they rush out and lay down that $2K+ on a scooter they may ride a handful of times before posting it on Craigslist. So many of these scooters, like treadmills, become dust catchers.

More persistent scooter snobs can readily be found at "scooter rallies". These are rare crowd gatherings where the participants seek out like minds for comradery and scooter "riding adventures".

Not everyone at these rallies is a snob. Some are actually solitary riders who hope that perhaps they might make some connection with kindred souls who ride more than to save gas or look fashionable or run up to the internet cafe for a bagel and coffee.

At the rally a group might go on a ride around the burbs or scoot into the heart of the city, but the feel of the rides are utilitarian. It's a "hurry up and let's get this part over" deal so they can get back to the merchant booths and lawn chairs up in the picnic grove 'cause the barbecue is almost done and the pop is cold!

Many of these moto snobs on scooters hope to epitomize the 1960s "mod" style in clothing and demeanor which more or less is the same as the current "hipster" or "grunge style" of the 1990s.

Others are "rockers", which usually translates to the James Dean style of dress and attitude and most gravitate to motorcycles after a season or two of feeling dorky riding a scooter to the sports bar for football games.

With these two lame choices, it's no wonder many scooter riders who aren't snobs go on to motorcycles or relapse back to the bicycle path because they are tired of being in a perpetual identity crisis.

That is, unless they are "hard core" riders of anything two wheeled and they just like the scooter versus the motorcycle or perhaps they come to own both. Plus many bicycles too numerous to mention.

The preferred rally scooter usually is of the Italian variety, or is a knockoff style thereof. Others scooter brands are tolerated as groveling wannabes.

Many of these rally scooters are slathered with stickers, decals, pinstripes, teddy bears, flags, and anything else that takes time to do to a scooter and which allows the rider to justify why they are not just riding that scooter instead of decorating it constantly.

We won't get into those who are constantly "modding" their scooters for an extra 5 mph or bigger tires or lower seat or wider handlebars. They NEVER ride their scooters because the scooter is always torn apart or up on the workbench!

Narcissists and artsy types gravitate to these types of "lifestyle" displays in scooterdom and convince themselves that they are truly being unique and authentic at the same time.

The scooter becomes a projection of the inner personality of the rider.

The scooter rider is NOT French, but the scooter looks Parisian with flags and colors and an Eiffel Tower silhouette on the cowl. (look that word up)

The scooter rider is NOT a war veteran, but the scooter is "Army green" with big white star decals or is Air Force blue with little airplane decals all over.

Don't get me started on dog owners and cat owners! Their scooters woof and purr along usually bedecked with puppy paw stickers, cat whisker seat covers, and sometimes even obnoxious "Luv My Fur Child" flags a-flying!

Yes, "moto snobs" are out there everywhere you go, so beware!

Photo Disclaimer: Don't sue me, I did not take these photos. I lovingly borrowed them off the internet. Thank you for your classy contribution, whomever you are!
Posted by Deb at 10:06 AM 14 comments: 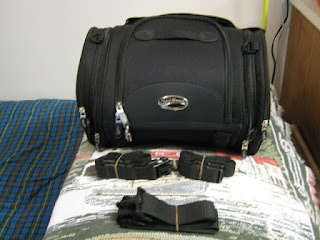 If you are tired of the "basket look" and don't want the rattling of a hard shell top case, consider a tail roll bag like the Saddlemen R1300LE Delux Roll Bag for your scooter or motorcycle.

This thing is awesome! It can be left compact width as is, or unzipped on the sides to expand your storage capacity.

The entry flap is on the top and can be locked shut at the zipper with the little included lock that attaches.

The bag is sturdy and does not collapse on itself, yet is flexible enough that you can stuff grocery bags or jackets inside. It might take a helmet-I never tried that because my underseat storage can swallow up 2 helmets, but I think the bag could do it.

The bag attaches by 2 clasp straps which can be expanded and contracted. Right now mine is attached by these straps being run under and through my rear carry rack. It is tight and secure. No worries.

For motorcycles with a sissie bar there is a wide velcro strap on the front of the bag that can be secured tightly.

There are loops and straps on the sides and top of the bag for bungees or other attachments, as you may use them.

I love the rain cover! I keep it on the bag when the scooter is parked outside under it's cover and it is definitely waterproof in torrential rains. I cannot guarantee that on just the cover alone, but it is nice to have when you need it.

Inside the bag there are 2 slot pockets for stuff and a pocket for the rain cover.